Backgammon is a dueling board game. The goal is to get your checkers out of the game board by moving them according to precise, yet simple rules.

Table of Contents Unshow
1 Contents and Object of the Game
2 Before You Start
2.1 Understanding the Game
3 The Game Begins
4 End of the Game
5 Rules in PDF

Contents and Object of the Game

Backgammon is played on a special board. It is made up of 24 points (called points) of alternating colors. These points are grouped into 4 zones of 6. The board is divided in two by a bar, which itself is a part of the game. It serves as the jail of the game.

Each player has 15 colored checkers, for a total of 30 checkers (white and black, white and red, etc.).

To play backgammon, you will therefore need:

A final item is the doubling cube, which is used by the pros. It is a large die used to multiply bets. If you’re just starting out, there’s no need to bother with it.

Unfold the game board, then position the checkers according to the following starting position:

So, as in the picture, the white player will be on the bottom, and the other player on the top. 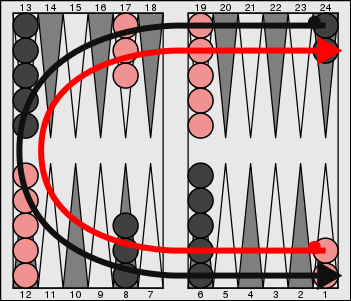 For their part, the red player will have to move their checkers from the black 1 point in the direction 1 black – 2 black – 3 black – etc.
Following this rule, the players should then have their respective checkers in their corresponding inner tables (directly in front of them).

The starting position is set up, the checkers are set in place. So the game can begin.

Each player takes 1 die, the two players roll their dice at the same time each in a different half of the board. The player who starts the game is the player with the highest score on the dice. In case of a tie, the players will make a new dice throw.

Once it is known which of the players starts, they will have to play the sum of both throws that determined which player will go first (the first player’s throw + their opponent’s throw). For example, White rolls a 3 on the dice, and Black rolls a 5. Black therefore starts the game, and will have to play 3+5. they can therefore move their checkers 3+5 squares. To do this, they must respect a few rules:

The players continue taking turns following these rules until the end of the game.

End of the Game

Once all your checkers are in your inner table, you can begin bearing off, which is the process of taking your checkers out of the game to win.

Here, only the white player has the right to start taking out their checkers. The red player will first have to bring their last checker back to their inner table before they are able to bear off.

The bearing off rules are simple:

Since you need a roll greater than or equal to the value needed to get a checker out, you will understand that the closer your checker is to the exit, the more obvious and easy it will be for you to get it out of the game.

The game ends when a player succeeds in taking all of their checkers off the board.

Explore the Backgamon rule in PDF.